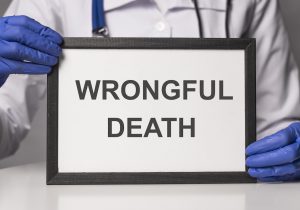 Wrongful death law is complex and involves numerous decisions and challenges. A wrongful death claim can arise from many different negligent actions or activities.  Just a few of them are car accidents, motorcycle accidents, accidents with tractor-trailers, medical malpractice, nursing home neglect, defective automobiles or products, inadequate security at stores or hotels, dangerous medications, exposure to dangerous chemicals, or any number of other negligent, reckless or willful ways.   As a result, we are frequently contacted by someone whose family member suffered an unexpected death caused by someone else’s negligence, carelessness, or poor decisions.  Anyone who has suffered the tragic death of a family member should consult with an experienced injury lawyer in Athens before trying to handle a death claim on their own.  There are just too many important matters to investigate and consider before attempting to resolve a wrongful death claim.

Insurance companies are quick to contact the family after death because they want to try to reach a settlement before the family consults with a lawyer.  They know that the insurance company can save thousands of dollars, and perhaps even millions of dollars if they can talk a grieving family member into taking a settlement check and signing a release before they contact an experienced lawyer.  Sticking a check for $100,000 in a grieving person’s hands will sometimes get them to settle but the person or family could be missing out on a lot more money if they had help and knew all of the facts and how much insurance is available.  Overlooked or undiscovered evidence surrounding the negligent acts that caused the death, or additional or excess insurance policies that are not identified, can cost a family millions of dollars in additional wrongful death compensation.  That is why speaking with an experienced lawyer is a necessity.

Dan Chapman & Associates are experts in wrongful death law.  It is a large part of our law practice, and we have handled many wrongful death cases in the Metro Atlanta area, all across the State of Georgia, and even in several neighboring states.

If you believe your loved one died because of the carelessness or negligence of someone else, call us now at (678)242-7626 for a free no-obligation consultation.  You and your departed loved one deserve to have all of the facts and deserve full compensation, because of the loss of a loved one and the related harms and losses that were suffered.

What Is Wrongful Death?

“Wrongful death” is a legal term used to describe an untimely and unnatural death caused by the negligent, careless, unlawful or reckless actions of another.  A wrongful death claim is a civil claim for monetary damages made against the person, business or governmental entity responsible for causing, or contributing to, the injuries that caused the death of an innocent person. Wrongful death claims are normally brought by one or more of the surviving family members of the person who was injured and died.

You need to understand that a wrongful death claim has nothing to do with criminal law.  Even though a person’s death can be caused by criminal actions, such as a crash caused by a DUI driver, there will be criminal law consequences for causing the crash and death and there can also be civil law consequences.  A wrongful death claim is a civil law claim that can be pursued before, during or after a criminal case is pursued against the wrongdoer. Also, you need to know that the defendant driver’s acquittal of any criminal charges will have no bearing on the civil wrongful death claim because they are separate and distinct cases, and involve different types of evidence and different burdens of proof.

In order to convict a DUI driver of vehicular homicide, the prosecutor must prove the elements of the crime using the “beyond a reasonable doubt” burden of proof.  That is a very high burden of proof.  However, in order to recover damages in a civil wrongful death case, the plaintiff family member must only prove the negligent acts that caused the death by a lesser burden of proof known as “a preponderance of the evidence.”  Under the preponderance of the evidence burden of proof, the plaintiff must show that is more than 50% likely that the negligent acts or omissions of the at-fault driver caused the death of the other driver.  In other words, in a wrongful death case, the jury can still have reasonable doubts as to what caused the crash and death as long as they believe the at-fault driver was more than 50% responsible for the crash that caused the death.

Who Can Pursue A Wrongful Death Claim?

Therefore, in Georgia, only the dead person’s spouse, children or parents, in that order of priority, have the legal right to file a wrongful death claim.  Other relatives such as a sibling, an uncle, an aunt or a grandparent, have no right in Georgia to bring a wrongful death claim unless they are appointed as the administrator of the dead family members estate and no other family member in the order of priority is available to bring the claim.

Pursuing A Wrongful Death of a Child

Georgia has a unique approach to the award of damages in a wrongful death case. In Georgia, all damages related directly to the decedent’s own injury and loss. There are no damages that result from any loss suffered by the surviving family members due to the death.  Under Georgia law, there are three categories of damages that potentially can be sought in a death case.  They are:

The other two claims listed above that result from the death, which include medical bills, funeral expenses and pain and suffering, are not part of the wrongful death damages in Georgia.  These claims are called Estate Claims and must be brought by the administrator of the estate.  The Estate Claim must go through probate court, but the wrongful death claims does not go through probate.

Dan Chapman & Associates are experts in wrongful death law.  It is a large part of our law practice, and we have handled many wrongful death cases in the Metro Atlanta area, all across the State of Georgia, and even in several neighboring states.

If you believe your loved one died because of the carelessness or negligence of someone else, call us now at (678)242-7626 for a free no-obligation consultation.  You and you departed loved one deserves to have all of the facts and deserve full compensation, because of the loss of a loved one and the related harms and losses that were suffered.